Minnesota-based Bushel Boy Farms is expanding with a new 50-acre facility in Mason City, Iowa. The $35 million investment in the new facility will increase current production by 50% and is expected to bring approximately 50 full-time jobs to the city. Tomatoes will be the initial crop.

VB Greenhouse Projects from the Netherlands has been recently awarded the contract for this modern greenhouse complex to be built in Northern Iowa. The groundbreaking, which took place on Sept. 11, commences phase one of a three-phase project and entails development of a 16.5-acre high-tech greenhouse with a modern packhouse and technical installations building. The foundation works are to commence immediately. The project is scheduled for completion in October 2020, with the first harvest expected in December of that year.

Bushel Boy is also building in its base of Owatonna, Minnesota, as construction is currently underway on a 4.5-acre research and development greenhouse also built by VB Greenhouse Projects. This state-of-the-art expansion will both increase production at its flagship facility and increase the variety of tomato offered. The construction phase of this R&D project is already set for completion in December 2019 with production starting in early 2020. 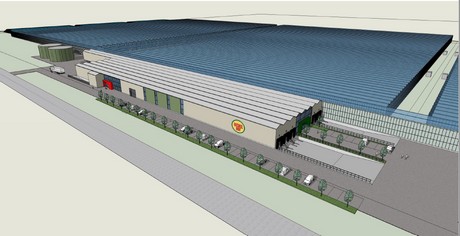 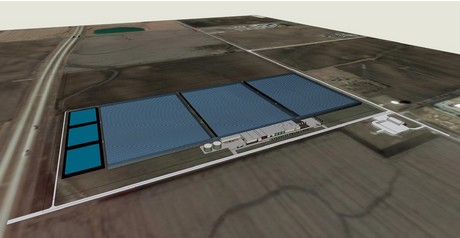 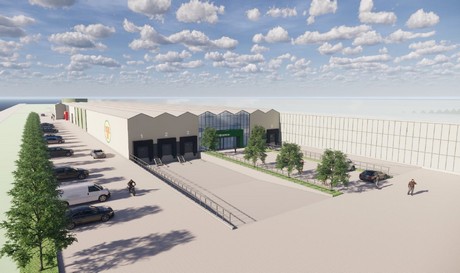 Bushel Boy - Mason City 3
Once both projects are complete, Bushel Boy will have 48 acres of greenhouse space, with infrastructure in place for 33 more acres. These projects will provide the company an enhanced ability to offer a wide variety of locally grown, premium fresh produce to the upper Midwest.

The Environmental Science business of Bayer, within the company's Crop Science division, has announced appointments for several leadership positions.

Jake Doskocil, Ph.D., has been named global project leader of pest management and rodent control for environmental science. He most recently served as product development manager for insecticides and led the Clayton Development and Education Center for Environmental Science.

Nonggang Bao, Ph.D., has been named as head of the environmental science field solutions development and experience center in Clayton, N.C., biology team manager and will also be responsible for leading projects within the ES global specialty actives team.

“We are thrilled to welcome this change among top innovators within our organization,” said Richard Rees, Ph.D., head of ES field solutions in North America. “At Bayer, we’re dedicated to keeping strong leadership in customer-facing roles to provide the innovation and support our professional customers need.”

The explosion in urban growth presents opportunities as well as challenges to our environment and our food systems. Many cities start looking for ways to feed themselves sustainably and to create a liveable and healthy environment for urban dwellers. To support these developments and explore the potential of urban farming, Wageningen University & Research organises an Urban Greenhouse Challenge every other year.
For whom
BSc, MSc and PhD students at universities or universities of applied sciences worldwide.
What?
We are looking for an iconic and circular urban ‘greenhouse’ for a city in China that
(1) produces safe and healthy food for the local neighbourhood and commercial markets and
(2) stimulates a healthy lifestyle and interactions with city dwellers.
We interpret ‘greenhouse’ broadly as a vertical agro-food complex, and include also e.g. vertical farming and integrated growing systems such as aquaponics.

The Challenge entries should integrate food production with social impact: stimulating a healthy lifestyle and interactions with consumers in circular architecture. The entries should be underpinned by a convincing business plan

The site on which the designs of the urban greenhouse will have to be based is conveniently located in Dongguan, at the heart of the Greater Bay area, which is one of the largest urban areas in the world and THE innovation hub of China. By high-speed train it is just minutes away from Guangzhou, Shenzhen and Hong Kong, an exciting location, where urban and rural come together, creating a myriad of opportunities.

Participation in the Challenge presents an unique opportunity to work on something that really matters, and to contribute to a sustainable future while developing extra-curricular skills and knowledge. It is a chance to build a CV, extend one’s network and get noticed on the job market.
Prizes
The total prize pool is € 15,000+ or  $1,656.72+ in U.S. dollars. The winning concept will provide inspiration for a new development project at the boundaries of a Chinese metropole.
Deadline
The deadline for registration is Oct. 31, 2019

Raudales told the crowd that the No. 1 thing she wanted them to take from her talk is that they should test their water before they make any decisions about water quality.

“One of the aspects that it’s important to consider is that all of us, no matter where we are located, have a limited amount of water resources,” she said. “Whether you're a small operation and your only source is a well or municipal water or whether you're a large operation and you’re trying to expand but you don't have additional water sources, the fact that you understand water quality will help you expand because you could reuse your water. High-quality water tends to be expensive, so we should treat it as an expensive resource, and we should try to use it rightly.”

Environmental stewardship is also important, she said, giving the example that she talked to a grower who said he had high nitrates on his farm where his children drank the water.

The crux of Raudales’ talk centered around the chemical and microbial factors that influence water quality. These are some of those.

Growers should test their water’s nutrient content at least twice a year, Raudales said. Different factors can affect nutrition. For instance, in Connecticut and other northern latitudes, road salt can contaminate well water.

Chemicals in water have different reactions depending on the pH of that water.

“pH is basically just a concentration of those hydrogen ions,” Raudales said. “The more of those we have, the more acidic the water becomes. So, the first thing to keep in mind is that the water pH is going to affect nutrient solubility.”

For instance, low pH can make iron more soluble. If growers suspect they have iron issues, they should send their water to a horticultural lab and tell the lab that they want to test for iron.

If iron is high, an effective method for growers to remove it is to precipitate it and then filter it out, Raudales said.

Some growers have high calcium and magnesium in their water. Raudales does not advise that growers filter these out because they are essential nutrients. What she suggests instead is to adjust fertilization to adjust to the levels in the water.

For growers who recirculate their water, PGRs at high levels in water can be a concern. Raudales and colleagues looked at paclobutrazol levels in water at some growers’ facilities, for example, and saw significant reduction in growth; for crops such as begonia, 5 parts per billion of the active ingredient in catchment tanks was enough to cause stunting.

“When we look at the numbers up close, one of the things we see is definitely the springtime is when we're seeing the numbers being a little bit high,” she said. “You can see some [that] later in the spring tends to get higher. For those growing poinsettias, we also sampled during the fall; the numbers were low, but still some of them were above that threshold where we started to see some reduction in growth.”

One grower who Raudales worked with and was experiencing high paclobutrazol, installed an inexpensive activated carbon filter after his water traveled through the catchment tanks. The paclobutrazol levels went below the 5 parts per billion threshold, and crop growth became normal.

Growers can have chlorine in their water from either using sanitizing agents or receiving municipal water that is above a healthy threshold for crops, Raudales said. Regulation says that there can be up to 4 parts per million of chlorine in drinking water, but horticultural crops can only tolerate up to 2 ppm before phytotoxicity issues can occur.

As with removing paclobutrazol from irrigation water, activated carbon filters can be effective in removing excessive chlorine, she said.

Growers with well water are unlikely to have issues with plant pathogens unless contamination is getting in from underneath the well, Raudales said.

“If you have pond water or recirculated water, then you should definitely start thinking, ‘I have to have some protected system in place,’” she said.

She said she has been asking around, and at the moment, the University of Massachusetts is the only lab she knows of that monitors plant pathogens in water. While the test doesn’t tell growers what the specific pathogen is, it will read either positive or negative.

Another option — expensive but worth doing, Raudales says — is DNA fingerprinting. The University of Guelph in Guelph, Ontario, Canada, offers this service.

“If you're going to start using a new water source, and that water source is going to be pond — if you have an issue that you really can't figure out — that is also a good option to think of,” she said. “What this DNA scan will give you is the list, and it’s going to give you a genus and species level ... and it’s going to tell you relative abundance. It's going to tell you, ‘Okay, of all the pathogens that you have here, this is the one that's the most abundant,’ or, ‘This other — it’s there, but it’s at a lower concentration.’”

There is nearly no avoiding biofilm in a greenhouse system. Raudales and her colleagues have found, though, that even growers who start with clean water have more bacteria in their pipes as the water travels through the system.

“You start with the low number, and as the water moves throughout the system, the numbers keep going up,” she said. “This is something that we've done so many times, and it keeps very consistent.”

“PVC is one type of pipe that works really well,” she said. “It’s easy to clean, but it seems to degrade a little bit faster than polyethylene. We're starting to look more into that.”

Raudales also recently received funding from the Horticultural Research Institute to study how to control it without damaging crops. She is currently looking to speak with growers who have algae in their greenhouses.

“You want to think about not just buying [specific] equipment but working with your engineering company to design a whole system because not one size fits all in case of water treatment,” she said. “But the basic components if you are trying to deal with pathogens, or microorganisms, is keep in mind your water source.”

Growers who have pond water should have multiple filtration stages, moving from a porous system to something finer; they can also install multiple filtration stages. Growers with recirculating water systems should think of their water as low-quality and filter out debris before the water arrives at the storage tank, then filter again and sanitize.

Raudales says she believes if growers had more storage tanks, they could achieve more with optimizing water quality. While it would cost the grower more and space may be limited, an additional storage tank could decrease the flow rate and reduce the need for massive filtration and injection systems.

“Water is only one component of the production system, so you always need to think about integrating crop management,” she said. “All the other cultural practices that are essential to avoid, for example, root rot, still apply.”

AmericanHort is accepting suggestions for topics for its educational programs at Cultivate'20, set for July 11-14, 2020 in Columbus. The deadline for submissions is Oct. 1, 2019. Click here to learn more.